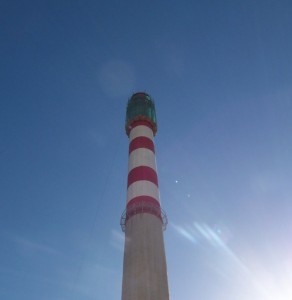 In 2005 and 2006 Rafferty’s specialised steeplejack services were recruited by AB Mazeikiu Nafta on their large oil refinery in Lithuania. In 2005 Rafferty’s carried out an all elevation external inspection of the 123.18m high No. 2 concrete sulphur stack. The top 13.35m of this particular chimney had been recently re-built by others with a moler type brick which was coated with a two part resin coating externally. The detailed inspection we carried out revealed that the outer resin coating and chimney brickwork within the top 13.35m of the chimney was found to be in an extremely poor condition, with large areas of the coating becoming loose and detached from the chimney and ultimately falling to ground level.

Following our inspection of the structure, our experienced management team gave great consideration to how the upper 13.35m of this chimney could be repaired. With no shutdown of the chimney planned for the foreseeable future, it was decided that the only long term and viable option would be to install a stainless steel sheath within the top approximate 14.5m of the chimney. The stainless steel sheath was designed and manufactured in-house and shipped over to Lithuania along with all plant, equipment and materials required to carry out the work.

The site works commenced in August 2006 and a strict time schedule had to be implemented to avoid the harsh Lithuanian winters. In addition to this, the client was unable to shut the chimney down so the entire project had to be undertaken without any disruption to the operating conditions of the chimney. To enable the safe installation of the sheath a modular frame and multi-lift scaffolding arrangement was erected within the top 15m of the chimney. A man riding and materials winch arrangement was installed to enable safe access for our steeplejack operatives and to hoist the sheath sections to the termination point of the chimney. Once in position, the sheath sections were welded together by Rafferty’s coded welders and a combextra sulphur resistant type grout was poured between the stainless steel plates and the existing chimney brickwork. This process was completed until the sheath completely enveloped the top 14.5m of the chimney. Concrete repairs were also carried out to areas of the reinforced concrete chimney shell using cementitious concrete repair mortar.

The aforementioned project was successfully completed on time without any safety incidents or disruption to the operating conditions of the plant. Daily quality checks of our workmanship were also carried out by the client to which we achieved complete satisfaction. The following photogrpahs will give you some indication of the scale of this particular project. Please click on the images to enlarge.