Rafferty’s have recently completed the demolition of a brick chimney for a valued client in the North West, UK.

The bulk of the demolition was carried out by our hardworking team of steeplejacks in a piecemeal fashion, depositing all rubble down the inside of the chimney. Access was in the form of specialised modular frame scaffolding which was installed at the termination point of the chimney and is designed to be lowered in conjunction with the demolition. The bottom approximate 20m of the chimney was demolished using a high reach machine.

The contract was successfully completed without any safety incidents and ahead of schedule.

Our clients lead engineer for the project had this to say;

As always, I am very happy with the work that you and your guys have carried out, and a pleasure to have them on site.

Thanks once again to your senior team who work hard behind the scenes to make sure that all aspects of the job come together when they should, your company has demonstrated an exemplary work ethic on a job that has been very much in the spotlight.

Rafferty’s have recently completed a bespoke engineering project for a valued client in Devon, UK.

The scope consisted of the design, manufacture and installation of 2 No. stainless steel liners & associated ducting to suit their new operating conditions.  The new liners were to be housed within the clients existing 35m high brick chimney, which is somewhat of a local landmark.

The site installation work of the new liners and associated ducting was carried out by a team of Rafferty’s specialised steeplejack operatives from mid-May to the early part of June during the clients planned shutdown period. The project was completed on time, on budget and to the complete satisfaction of our client.

Our client, Alison Kitchener – Business Project Manager, had this to say;

As part of our new CHP installation project we had to think carefully about how best to manage the resultant emissions from this and the new combination boiler. Our brick chimney stack is 35m tall and it was calculated that the new more efficient equipment would only produce emissions which would reach about 20m before condensing. We therefore had to consider whether to install new stacks, take 15m off the top of the chimney (which would have looked odd) or install new flues which would be narrower but would allow us to continue to utilise this important town landmark. As Rafferty’s have maintained the stack for so many years, they were the obvious choice to assist us with our decision making – the result of which was the installation of 2 new flues.

We were really pleased with how Rafferty’s worked alongside ourselves and our CHP contractors as space was limited and we had to accommodate various cranes as well as the flues etc. whilst continuing to operate and move fabric around this area. Some of our meeting rooms look onto the works and I know a few meetings were paused as the spectacle of the flues being lifted above and down into the chimney were observed. We were fortunate with the weather overall so the work was completed by the required date allowing the rest of the CHP installation project to progress as planned. Thanks to Matt Rafferty, Carl Woodroffe, Steve Moulton and his team for all of their efforts with this project which ensures the continued use of the chimney for many more years to come.

The work carried out on the chimney was independently inspected and verified by the client and a structural engineer namely, John Turner (Engineering Consultants) Ltd, to which we achieved complete satisfaction from all parties involved.  John Turner had this to say on completion of the contract;

The work to the chimney consisted of the following;

The following photographs show the chimney on completion of the works. 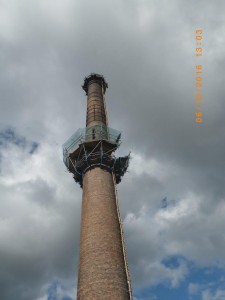 Rafferty Steeplejacks have been awarded a contract to carry out essential maintenance works to a 50m high brick chimney in Swadlincote, Derbyshire. 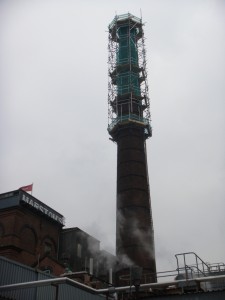 Rafferty Steeplejacks are delighted to have been awarded a substantial contract to carry out major refurbishment works on a 41m high Grade II listed brick chimney for Marston’s Plc at their historic brewing site in Burton-On-Trent.

Following our initial inspection survey in August 2012, safety scaffolding and netting was immediately installed within the top 16m of the chimney due to the poor condition of the brickwork in the upper levels of the stack.

The 21 week project is due to start in early February and includes for carefully deconstructing and re-building the top 14m of brickwork, re-pointing the remaining 27m of the chimney and fitting an up to date lightning protection system.

The Prince’s Trust is currently undertaking a £7.5 million capital project to regenerate the Grade II listed factory at Middleport Pottery in Burslem, Stoke-On-Trent. The site, which was described as “a national treasure” by the English Heritage has been in continuous operation since 1888 and is now the last working Victorian Pottery factory in the UK.

With the Middleport Pottery site being located only a stone’s throw away from our head office Tunstall, Stoke-On-Trent, Rafferty’s were delighted to be awarded with the contract to carry out a detailed inspection survey and full refurbishment of the 30m high Grade II listed industrial brick chimney located on the site.

Our initial inspection survey of the chimney was carried out using a mobile crane and man basket to enable safe access to all elevations of the stack. Our inspection revealed that the brick chimney was found to be in a structurally unsafe condition and in need of extensive refurbishment works.

The chimney head and blocking brickwork at the termination point of the chimney was found to contain deep, open and perished mortar joints along with severe fractures, bed-lifts and loose brickwork. The remainder of the chimney shaft brickwork below was found to contain shrinkage of mortar and perished mortar joints. Finally, the retaining band steelwork was also found to be in a very poor and deteriorated condition, with sections of the steelwork found to be loose and in danger of falling to ground level.

Rafferty’s promptly compiled a comprehensive inspection report and highlighted the defects evident on the chimney. Due to the unsafe condition of the retaining band steelwork and chimney brickwork at the termination point, Rafferty’s were quickly instructed to undertake the works and make the chimney safe.

As the chimney is a Grade II listed structure the refurbishment works had to be carried out under a strict specification provided by the English Heritage and conservation architects. The chimney head and blocking brickwork had to be carefully deconstructed and re-built using the existing brickwork to exactly match its original appearance. At the request of the architects, the only alteration would be the installation of two weathering courses at the top of the chimney head which were laid on creasing tiles to create a water-shed chamfer profile. All brickwork re-pointing works had to be carried out with precision from initial preparation of the mortar joints to the application of a English Heritage approved lime mortar. The re-pointed mortar joints were slightly recessed to reveal brick arris and following the application of the repair mortar all newly pointed joints were lightly sprayed with fresh water and then wrapped in hessian which was dampened down and left in position for a period of 3 days to keep the mortar joints moist.

The quality of Rafferty’s workmanship was independently inspected by architects on a weekly basis to which we achieved complete satisfaction. A brief outline of the chimney refurbishment works is detailed as follows;

As the head of the Princes Trust, Prince Charles is regularly kept up to date with the progress of the regeneration works at Middleport Pottery and we were told that he took particular interest in the chimney refurbishment work being carried out by Rafferty’s. We sincerely hope that Prince Charles will be pleased with the work that we have carried out on this grand old chimney structure.

The following photographs show various stages of the work from the condition of the chimney before repairs to the final completion of all refurbishment works undertaken.

Rafferty’s have successfully completed a full refurbishment of a 40m high brick chimney at Aizlewood’s Mill, in Sheffield. A brief description of the repair works included the following;

On completion of the works our customer was so pleased with the conduct of our company and the steeplejacks on site that they took the time to write a letter of gratitude to which all at Rafferty’s were very grateful to receive (please see copy below). Rafferty’s would like to take this opportunity to thank Catherine and everyone involved at Aizlewood’s Mill for their hospitality and kind words of appreciation for the service we provided. 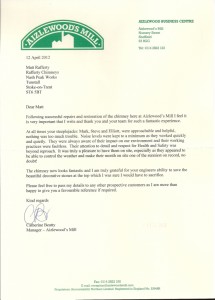 The photographs below show the chimney repairs carried out.

Rafferty Steeplejacks have been awarded a contract to carry out the complete refurbishment of a 27m high brick chimney at the Greater Manchester Police Museum in Central Manchester. The works will include the following; 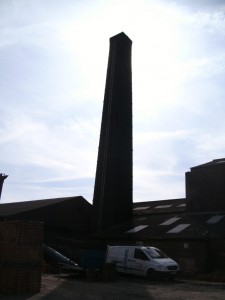 A valued customer based in Gloucestershire UK has awarded Rafferty’s a contract to carry out external and internal maintenance works on a 30m high brick chimney during the Christmas period.

Finally, when you are enjoying the festivities this year please spare a thought for the steeplejacks working up high amongst the soot of the chimneys around the UK. For these hardy men it will definitely not be a white Christmas!

Rafferty Steeplejacks are undertaking a complete restoration project of a brick bottle oven chimney in of the heart of the Potteries (Stoke-On-Trent). The structure, which belongs to Moorcroft Pottery, is over 90 years old and the restoration works have attracted the interest of the local Sentinal newspaper – please click on the following link to read artical. http://www.thisisstaffordshire.co.uk/news/Bottle-oven-restoration-coming-nicely/article-2987652-detail/article.html

Rafferty’s are very privileged to be involved in a project that helps preserve the heritage of their home city. The following photograph shows the second and third generation of the Rafferty steeplejack family, Nick Rafferty (right) and Matt Rafferty (Left), taking the opportunity to stand at the top of this now very rare structure.