Our 70th year in business has been fantastic, with turnover for both the steeplejack/specialist access division and lightning protection division far exceeding original expectation.

Showcased below are just a handful of notable projects which highlight the variety of specialist work that we have successfully completed in 2019.

Successful completion of the demolition of a 91.5m high reinforced concrete chimney in St Helens, UK.

The demolition of this chimney was carried out in a piecemeal fashion down 20m above ground level using our innovative sliding band scaffold platform which enables the scaffolding to be lowered as the demolition proceeds. The bottom 20m of the chimney was demolished using a high reach machine.

Our team of steeplejacks worked tirelessly throughout this contract and completed the project ahead of schedule and to the complete satisfaction of the client who had this to say on completion of the contract;

Firstly please thank the guys from me again, they did a remarkable job without any issues/incidents and well within timescales, they are a credit to your team!

Secondly thanks to you, Carl and Nick for the management of the project.”

“I would like to extend my thanks to the Cowley Hill Team & Rafferty’s for their outstanding execution of what was quite a challenging project.

The work was completed without any safety incidents and on budget / to time.”

The time lapse video below shows the demolition from start to finish.

Rafferty’s were initially contracted to carry out a full external inspection of the chimney and were subsequently employed to undertake repair works within the clients budget restraints.

The repair work consisted of and included;

We captured some fantastic drone footage of this particular project which can be viewed below.

The controlled demolition or dismantling of any tall structure is usually a highly complex undertaking in itself however, place this structure directly next to one of London’s main railway lines (which had to remain live at all times) adds a whole other level of complexity.

Two sliding band scaffold platforms were installed at the termination point of the chimney which are specifically designed to enable them to be systematically lowered throughout the course of the dismantling process. The bottom scaffold platform was used to prepare each concrete ring for dismantling by exposing the tie rods connecting each section together. The top scaffold platform was then used to enable the dismantling of each concrete ring section. Each concrete ring section weighed 7T and required a 250T heavy lifting mobile crane to carefully dismantle and lower each section to ground level. When considering the close proximity of the rail line and the small and restricted area of the site itself, the positioning and slew restrictions of this large crane had to be determined with such precision that our in-house CPCS Appointed Person had to produce CAD drawings to detail it’s exact position, as every millimeter counted to ensure that the jib of the crane would not fall on to the live tracks of the railway line in the unlikely event of a crane failure.

Our methodology for the safe and controlled dismantling of this chimney underwent vigorous scrutiny by Network Rail engineers and consultants however, our vast experience in complex industrial chimney demolitions in live environments and the meticulous attention to detail applied throughout this contract from start to finish enabled us to completely satisfy all requirements and the project was subsequently completed ahead of schedule and without incident. 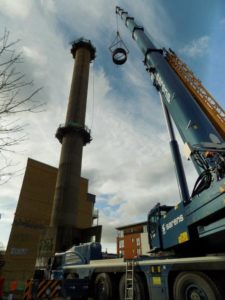 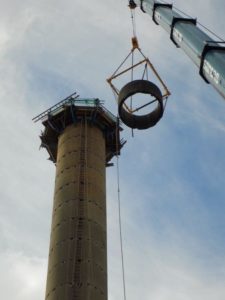 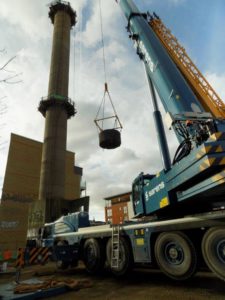 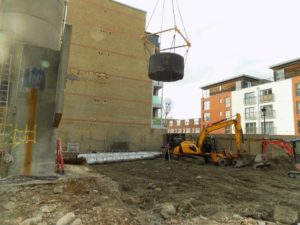 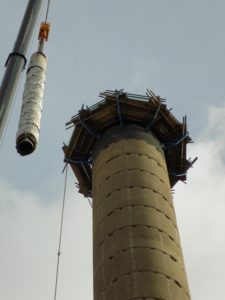 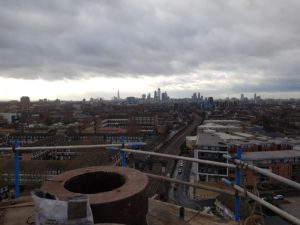 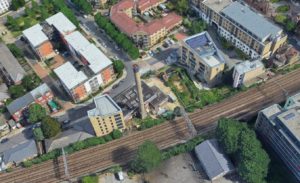 This particular Church has been struck by lightning several times in recent years and in 2014 a strike caused tens of thousands of pounds worth of damage. Rafferty’s were awarded the contract to design and install a complete lightning protection system to the church in compliance with BS EN 62305.

To install the lightning protection system access had to be gained to all levels and orientations of the church building. The church spire rises to a colossal 59.74m (196ft) above ground level and the upper most roof apex rises to approximately 30m (98.5ft) above ground level. Our steeplejack & specialist access division teamed up with our lightning protection division to provide a full turnkey installation project, using various forms of specialist access and rope access techniques. Our versatility when working at height avoided the need to install scaffolding from ground level to the high level locations of the church building which paid dividends for the client on this project, saving them tens of thousands of pounds in potential scaffolding costs alone. 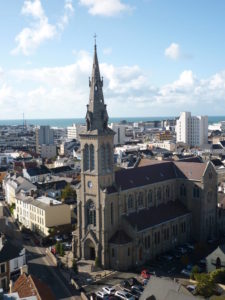 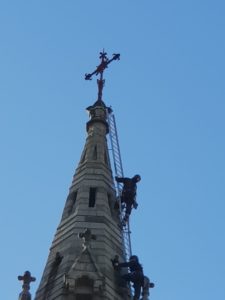 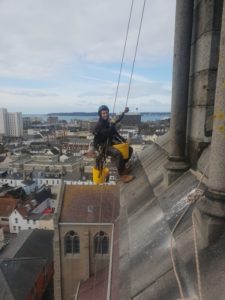 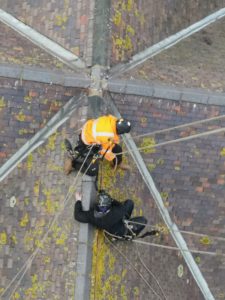 The works included the installation of specialist steeplejack access equipment and scaffolding to enable the dismantling and replacement of a deteriorated and unsafe steel up-stand at the termination point of the chimney. The replacement up-stand section was designed in-house and manufactured from stainless steel. It was designed in flanged & bolted sections to enable installation whilst the chimney remained in operation, avoiding the need for an unplanned shutdown and the requirement to hire a large and expensive mobile crane to lift the new section in to position. The full height of the 91m high steel chimney was also cleaned down and re-painted as part of the project.

Our innovative design and access methods along with our vast experience of working on chimneys that are operational ensured that this particular project was successfully completed without the need for an unplanned and forced shutdown, enabling the client to continue their 365 day, 24/7 operation of the chimney. 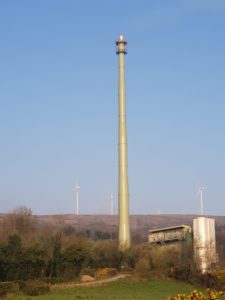 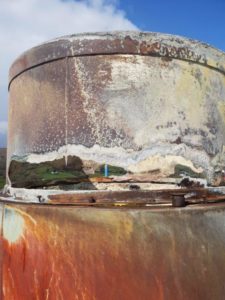 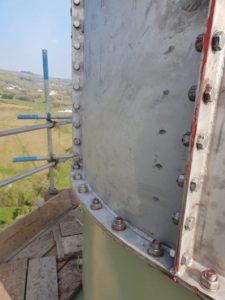 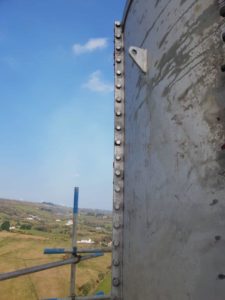 The Riverside Quarter housing development in Aberdeen is being built on the site of what was once Davidson’s Paper Mill. The 40m high brick chimney which previously serviced the Paper Mill was constructed in the late 1800’s and is to remain as a heritage feature of the new development.

Rafferty’s were initially contracted to carry out a full external and internal inspection of the chimney and provided a detailed written condition report complete with recommendations for a longstanding repair solution to which we were subsequently employed to undertake.

The work consisted of a complete refurbishment of the chimney and included;

The client had this to say on successful completion of the project;

The chimney is looking great and can I also say that dealing with your men on site and your business in general has been very professional. I would be happy to recommend Rafferty’s to others if they required similar works to be done. 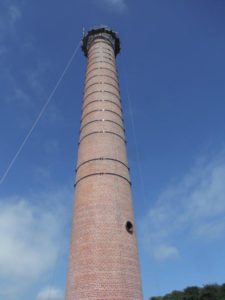 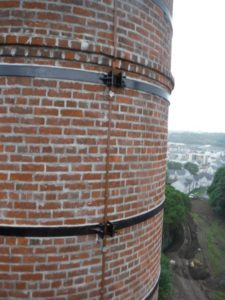 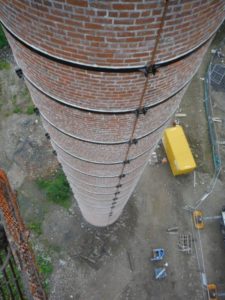 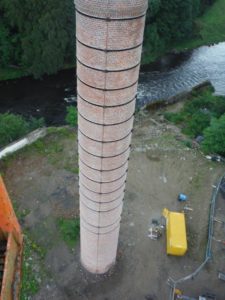 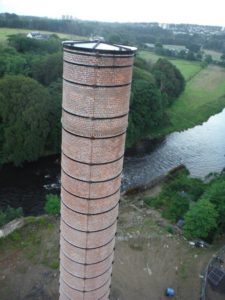 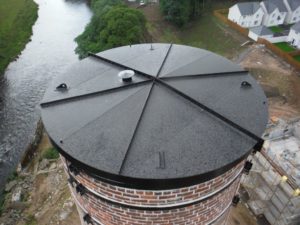 Our specialist skills and versatility when working at height can be adapted to any tall structure and this particular project highlights the cost saving benefits of the services that we can offer to clients.

Rafferty’s utilised specialist access and rope access techniques to carry out maintenance and the complete re-painting of 3 No. fuel silo structures, avoiding the requirement and associated expense for extensive scaffolding access.

The photographs below show before and after photos of the re-painting works. 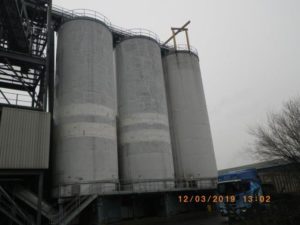 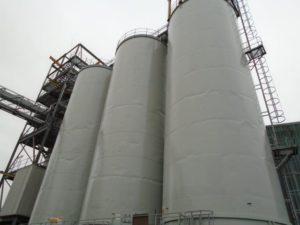 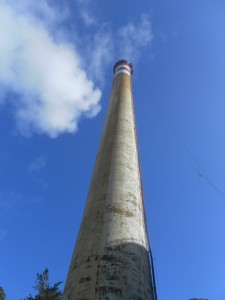 In January 2014 Rafferty’s were awarded a contract by the States of Jersey to carry out the complete demolition of the decommissioned reinforced concrete chimney at Bellozanne EfW Plant in St Helier.

The chimney structure was constructed from reinforced concrete and stood 100m above ground level with a respective base and summit diameter of 6.57m and 5.63m.  Internally the chimney housed 3 No. brick and steel constructed flues which were supported on an array of 10 No. reinforced concrete floor slabs. Other than the bottom 20m of the concrete windshield, which was demolished using a high reach machine, the full height of the chimney was demolished in a piecemeal fashion.  This mammoth task was carried out by a select team of highly trained and experienced steeplejacks over a 22 week target schedule.

To provide safe and suitable access for the demolition, a specialised modular frame scaffold platform was installed at the summit of the chimney. This scaffold platform is designed and installed in such a way that it can be lowered as the demolition proceeds.  However, before the chimney could be reduced in height all internal components, such as the 3 No. brick/steel constructed flues and 10 No. reinforced concrete floor slabs, would need to be demolished first. This was carried out using a man riding winch complete with steel gondola for access. To view the removal and final descent of the upper most concrete floor slab please click on the video below.

With the chimney void now empty the demolition of the main concrete structure could now commence.  This procedure was carried out in a piecemeal fashion.  Rivet busters were used to break away areas of concrete to expose the steel reinforcing.  Once exposed the reinforcing steelwork was cut with flame cutting equipment, allowing a panel of concrete fold in and gravity to take effect, with the concrete panel falling to ground level within the void of the chimney.

The contract was successfully completed ahead of schedule without any safety incidents and to the full satisfaction of the client.   Mr Peter Wilkinson, Principle Engineer on the project for the States of Jersey was kind enough to write a letter of commendation following completion of the works.  To read the letter please click on the following link Letter_Rafferty 230914 reference.

We would like to personally thank Peter and all involved for their support and allowing Rafferty’s to be of service to them and the States of Jersey on this contract.

The following photographs show various stages of the demolition.