A Tribute to Sam Rafferty

Rafferty Steeplejacks was formed as a result of Sam Rafferty being a paratrooper in the 6th Airborne Division during World War II.

Sam came from a very poor working class family, he worked down Chatterley Whitfield coal mine as a pan lad from 11 years of age. He was buried alive for two days until he was rescued. He continued to work down the pit until he was 14 years old.

Jumping out of aeroplanes into battle was a new concept in World War II. Due to this and Sam’s sense of adventure, he joined from its formation the 8th parachute battalion, 3rd parachute brigade of the 6th Airborne Division.

Sam parachuted into Normandy in France on ‘D’ Day 6th June 1944. He survived this harrowing experience only to be sent to fight in the Battle of the Bulge in the Ardennes Forest during the freezing winter of late 1944. On his return to England, Sam then a combat veteran of ‘D’ Day and the Battle of the Bulge, started to prepare for what would be his final parachute jump over the Rhine into Germany. On the 24th March 1945 Operation Varsity began. Sam and his brave comrades of the 6th Airborne Division (see picture below) were about to embark on an adventure which would eventually climax in the end of World War II. Sam Rafferty was one of the few that survived all three major World War II combat operations involving the 6th Airborne Division. 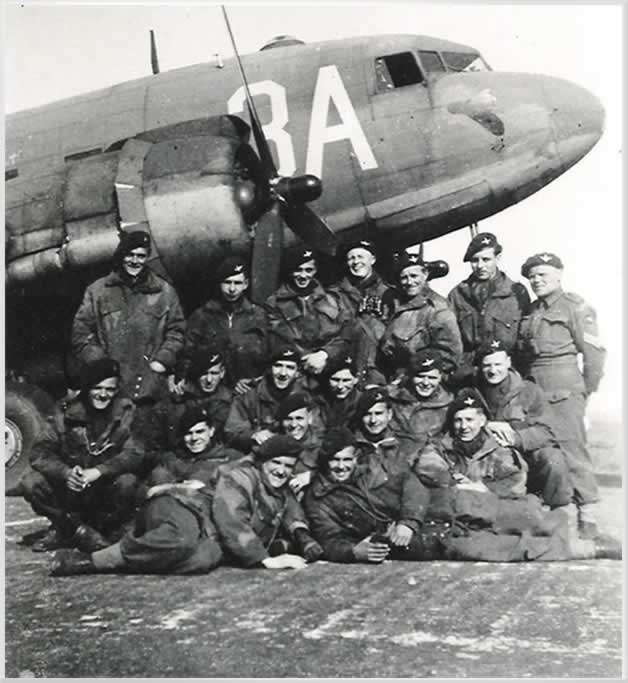 Sam Rafferty is pictured above on the front row right, with Paratroopers of 5 Platoon, B Company just prior to the Airborne drop over the Rhine into Germany. “From this day to the ending of the World,…we in it shall be remembered… we band of brothers.” HENRY V, William Shakespeare.

After the war Sam was sent to Palestine where he was finally demobbed from the parachute regiment in 1946.

Sam survived all of the aforementioned by the young age of 22!

On his return home to England Sam initially found it difficult to adjust to civilian life. With work in short supply he was about to rejoin the parachute regiment to make a career in the Army, as he thought nothing could match the thrill of jumping out of aeroplanes. This was until, on the very day he was to re-enlist, he saw two steeplejacks swinging on bosuns chairs working high up on a 300 foot brick chimney in Stoke. They allowed Sam to climb up and he was immediately hooked by the danger and thrill of the job. He claimed that in Civvy Street this was the next best thing to being a paratrooper, so with his head for heights and nerves of steel Sam became a steeplejack.

With the self belief he had gained from being a paratrooper, Sam was determined to make something of himself. In 1949 he formed the Rafferty Steeplejack Company which became limited on the 12th April 1954. Sam worked hard all his life and the company he so proudly established is currently being run by his only son Nick. The 3rd generation of Rafferty’s, Sam’s two grandsons Matt and Daniel, are now also working for the company.

Sam lived to see his company grow from its humble beginnings to national and international status. His proud son and grandsons are determined to continue with the traditions Sam so strongly believed in and trusted.