The S1240 steel chimney was manufactured and installed in 1975 making the chimney circa 35 years old. As steel chimney design standards have been revised and improved since original construction, along with the present condition of the chimney following our initial inspection, it was agreed that the chimney should be re-designed and a structural feasibility study should be carried out to CICIND:1999 and the new Eurocodes EN 1991 which will soon replace the present British Standard BS4076;1989 for steel chimneys. The re-design calculations and feasibility study revealed that the design life of this chimney could be substantially extended by over-plating and strengthening works being carried out to various areas of the chimney shell along with replacing the helical strake wind stabilisers at the termination point of the chimney with a modern fluid stabilising damper system to reduce excessive oscillations.

Rafferty’s offered the client a full turnkey project solution to extend the design life of this chimney and such was their faith in Rafferty’s knowledge, experience and capabilities in steel chimney construction and maintenance, the contract was awarded on single tender.

As previously stated, as the client was unable to shut the chimney down for the entire duration of the project, all works had to be approached from an external view point. As the chimney shell is concealed with mineral wool insulation and aluminium cladding externally, the cladding and insulation would need to be removed to enable any repairs to the chimney shell to be carried out.

It was decided that the first area of consideration would be the deteriorated areas of steelwork and holes that were located in the top section of the chimney. To access the full circumference of the chimney, a modular frame scaffold deck was installed directly below the upper most flange at 42.1m above ground level. Following which a multi-lift scaffold arrangement was then erected for a further 8m providing safe working platforms to all elevations of the structure within this area. Further design calculations were carried out which prevented fully scaffolding the top section of the chimney to the termination point as the scaffolding would add additional wind loadings to the already weakened structure. Therefore, the remaining top 6m of the chimney would be accessed by erecting a full circumference modular frame scaffold deck at approximately 2.5m below the termination point and from this a full circumference moveable tirfor platform was utilised to gain access below. This form of access was only installed once the multi lift scaffold arrangement was dismantled. Please see the following photographs showing the scaffold arrangement and click to enlarge.

Utilising the multi lift scaffold arrangement and moveable platform, the aluminium cladding and insulation was removed throughout the full height of the top chimney section. On removal of the cladding numerous defects were located to the chimney shell steelwork. Directly above flange level the original manufactures of this chimney installed a cladding ring throughout the full circumference of the stack. Its purpose was to support the insulation above and prevent it from slipping. As the cladding ring protrudes from the chimney shell, it is considered as an external ‘cold spot’ as it will not be consistent with the operating temperatures of the chimney shell steelwork. These external ‘cold spots’ are where accelerated corrosion and deterioration will form on steel chimney structures should weather penetration occur. Numerous ultrasonic thickness readings were therefore carried out above and below the cladding ring which revealed that the chimney shell had deteriorated far beyond its original corrosion allowance. Further deterioration and holes had also occurred around other external ‘cold spots’ within the top section of the chimney such as the access ladder securing brackets and helical strake securing bosses. Please see the following photographs which show the deterioration identified within the top section of the chimney and click on images to enlarge.

Following the inspection, the areas of the chimney shell requiring maintenance works were plotted and submitted to the client. Extensive over-plating works were then carried out to the chimney shell steelwork with the top section of the stack. Using trained steeplejack coded welders, the cladding ring was removed and the chimney shell at this location was over-plated with 8mm thick mild steel plate for a depth of 1m throughout the full circumference. Extensive patch plating was also carried out around the access ladder securing brackets and helical strake securing bosses at required locations with 8mm thick mild steel plate. Quality procedures were also implemented throughout the duration of the repair work and our workmanship was independently inspected and quality checked by a qualified company who carried out a magnetic particle inspection of the new weld seams. The results of which achieved the complete satisfaction of the client.

This project was successfully completed without any safety incidents and to the complete satisfaction of the client. Our ability to provide innovative maintenance and access solutions have succeeded in prolonging the design life of this structure without any disruption to the operating conditions of the chimney. 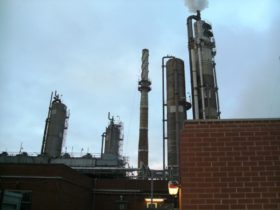 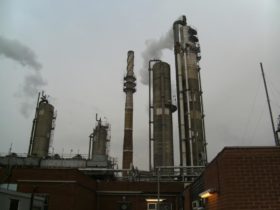 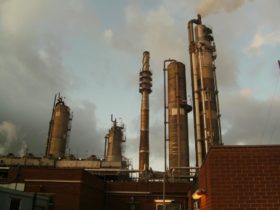 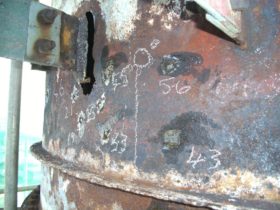 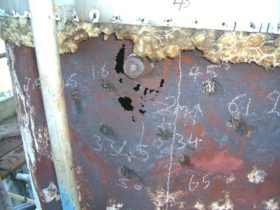 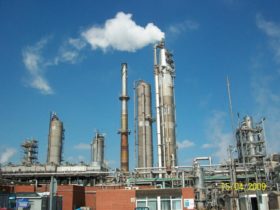 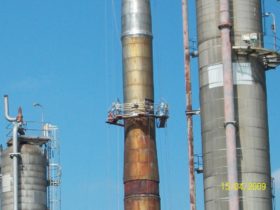 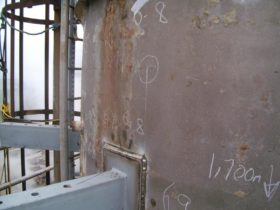 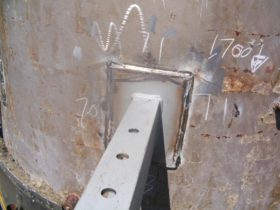 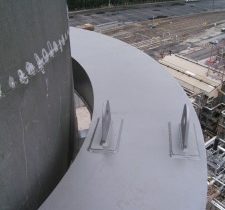